A Brief History of Bruno’s

What started as a small bar in Portland’s Little Italy has flourished into a local hotspot that has provided Portland with great food and service for over thirty years. 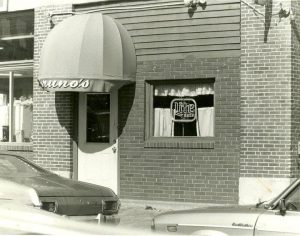 In 1981, Bob Napolitano opened his small bar, Bruno’s, on India Street. The bar was located in the corner of Micucci’s Grocery. Because of the small size, Napolitano only sold hot dogs and bottled beers.

When Bruno’s popularity began to grow, so did the need for more space. In 1985, the bar was relocated down India Street to a location that offered both kitchen and patio space. Here, Bruno’s became the first place in Portland to offer calzones.

The Move To Market Street

In need of even more space, Bruno’s moved to Market Street in 1989. Here, the name Bruno’s was changed to Erik’s in order to keep the loyal customers of this already established business.

Ten years later, in 1999, the bar was renamed to Bruno’s when the business moved to its current location at 33 Allen Avenue in Portland.

Today, Bruno’s is ran by Bob and his son Dan. Whether it be for a football game, family dinner, or private banquet, local’s enjoy spending their time at Bruno’s.

Bruno’s Restaurant and Tavern takes pride in being Portland’s choice location for Italian food. We look forward to continue serving our great community for many years to come!